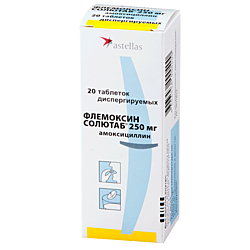 The story of one of the disease. Antibiotics for children. Flemoksin soljutab instructions for use. Side effects from taking the antibiotic. Very useful tips physician at children's emergency.

Everyone was more or less the adult knows what antibiotics are, why they are needed and what negative consequences may bring. But for many it's just such a strange name medicines. To go into details, I will not. For this there is a very well written article on the Internet. But in brief:

Antibiotics are a group of strong, natural or synthetic drugs that can suppress the growth of certain microorganisms or cause their death. Treated with antibiotics, not all infectious diseases. Antibiotics act only on microorganisms and useless in viral diseases such as influenza, hepatitis, chickenpox, herpes, rubella, measles.

Antibiotics are divided into groups, each of which is able to deal effectively only with certain types of microorganisms. That is why the antibiotics only makes sense after establishing an accurate diagnosis. But this is not always possible to do it quickly, ie fast. But help is needed here and now. In such cases, doctors usually prescribe broad-spectrum antibiotics. This situation was with my son. 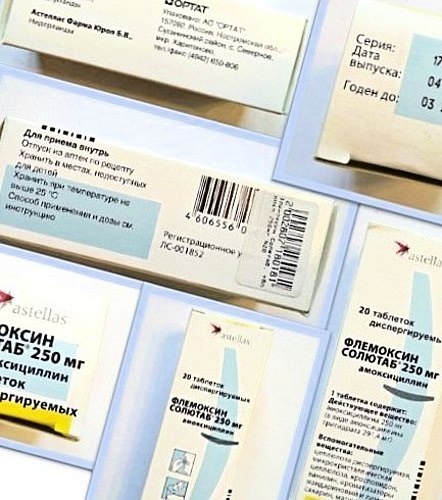 ✍ Why do we need these tablets:

The child is ill. Temperature 38.6, wet cough and a General depressed state. And all this in the morning. I called the pediatrician. Waited for her all day. All this time, treated myself, as best I could: I'd make inhalation with natural solution, give expectorant drugs, sprinkle in the throat perfectly and lowered the temperature of the medication as needed. About 5 p.m. the doctor called and said that the application for visiting us she got only because of a system failure, so come to us tomorrow. I povozmuschalis, and continued the planned course of treatment. The temperature rose to 38.6 every 5 hours.

On the next page. the day the doctor visited us for about three days. Listened to lungs, checked his throat. Adjusted the course of treatment and wrote a prescription for an antibiotic but said to take 2 days in case of preservation of high temperature. Its recommendations were as follows:

Additionally, the pediatrician said that since the temperature is growing so fast, it is not necessary to lower at 38.5, but you can wait a little bit more to 39. To me, this aspect is not immediately liked, because Dr. Komarovsky writes differently, and it was his recommendation I'm adopting for self-treatment before the arrival of doctors. Well, I think, can still pediatrician right. During her examination, I measured the temperature - it was 38.6.

When the doctor left, I ran to the pharmacy for ramalina and ibuclin. Everything else we've had in our medicine Cabinet. The children remained with the grandmother. My quest for drugs took 30-40 minutes. When I got home, my son's temperature was 40.1. I was scared and confused. Gave effective, as advised by the pediatrician. Per hour, the temperature dropped only to 39. I began to call the pediatrician on her personal phone. It is, of course, did not answer. In General, after talking with my mom and husband decided to call an ambulance. She arrived after 40 minutes. The child gave an antipyretic. Suggested to go to the hospital. I Packed a bag, but I decided not to go, because the younger the child is ill and sitting with him could only my mother, but it is not very convenient, and scary (she and I). The ambulance has been with us for 40 minutes. They have a lot of papers with writings... before Leaving, the EMTs said that for 2 hours after them come children's ambulance. We understand that it should be so, if the patients refuse hospitalization.

Soon I called the pediatrician. She described the situation. She said that just so everyone anxious, and it is possible today to begin to take antibiotics. Sent husband to the pharmacy. Bought. Brought. Gave the child the first pill.

The ambulance arrived around 10 PM. The children were sleeping. Before bed I wiped cool water because the temperature was already after 4 and a half hours. So often give when I'm afraid, especially since before that it was the pill and the shot, so I tried to half an hour to delay the time of receiving the next portion. Son, of course, complained that he was shivering and wiping the run from the creeps, but I still wiped. It turned out that you can't do that.

When the ambulance arrived the child had to sleep, despite my abuse. He had to Wake up. The inspection was conducted by a wonderful woman doctor. It is the most appropriate doctor who ever came to us from the ambulance (an ambulance and I call quite often, because a panic). She explained that wiping the child with cool water, if it is already cold, you can't. Because a fever means that body temperature is already increased, and on the outside yet, so even at 37.5 if the child stiffening, can be given antipyretic+the noshpu. I honestly can't remember why noshpu, but this moment I clearly remember that when chills should be combined antipyretic noshpu. During its inspection the temperature was 38.9. I gave Nurofen and noshpu. It was 22.30. The doctor explained that during the hours after ingesting the drug, the temperature can rise, but an hour later will decrease. The doctor again examined the child, adjusted the appointment of a paediatrician, namely - removed effective to ... Want to curse, because I and so with this moral ebulinum hardship. There is a separate song, who are not interested, skip this talk (the next paragraph).

Back when eldest son was little, our pediatrician (a man) said that if the temperature rises after a short time after administration of antipyretics, the use of this procedure must be alternated. For example, Nurofen and Nurofen. Then a day can be taken of each active substance in the framework of the specied maximum. Because each of them individually, the maximum allowable dose per day - not great. For example Nurofen can be taken only 3 times a day. But if the temperature increases every 5 hours, then what? So he suggested this method. I all the time used. And there was this prescribed effective... it contains paracetamol and ibuprofen together. It turns out that to alternate with. A doctor with the ambulance confirmed that there is no need of distortions, and continue as before - alternate Nurofen and Nurofen. In addition, she said that too bad shigemoto temperature you can insert the rectal floor candle voltaren. It's very powerful, so it is permissible to make only 1-2 times for sickness, and only in extreme cases. Had to send the husband to the pharmacy, benefit there are working around the clock. After departure, the doctor was with us on the phone, for what it HUGE gratitude. The first time I called about an hour later twenty. I said that temperature is almost not decreased. At that time it was around 39.1. The doctor said to wait another half hour and call her back. It turns out I called her somewhere at 00.30. The temperature was still higher than 38.5. It is recommended to insert the half-candle. Inserted. The effect was excellent! The temperature dropped almost to normal and did not grow until lunch (12 hours) the next day. So take a note (specifying, of course from his pediatrician) that's the way woltarena.

Well, now closer to the subject matter. From that day I began to give the child antibiotics and Linex After each tablets flemoksin Solutab, after 2 hours gave 2 tablets Linex. When I had to give 2 more times: as I wrote above - at lunch and at 2am. Tablets flemoksin Solutab, I was already measuring Cup from cough syrup and diluted this syrup. Here's a cocktail drank. Maybe it was wrong. But to not give the 2 drugs separately, I went to this trick. Maybe stupid, I don't know. On day 5 of the antibiotics in the morning son threw up right after I gave him all the drugs. 1 tablet turns out... after Waiting a half hour after that, I gave another. Till evening everything was fine. On the next page. the day it all morning throwing up. He was pale, lethargic and lay down. I called the pediatrician. It was my birthday. In 3 hours she came. Felt tummy, checked my throat, listened to my lungs. Said that most likely it is a reaction to the antibiotics. Like many have already accepted, it's time to stop. At that time we ate 19 tablets, of which at least 2 immediately went out together with vomiting. From this bad symptom of the child was spelled out:

All of which I gave just before lunch the next day. It seems to me, after the son stopped eating flemoksin soljutab, and immediately the nausea passed. Medications from the second destination smoothed over the effects from the antibiotic, and then the body itself are all aligned.

✍ Characteristics of the drug:

Pills come in different dosage and different quantity in one pack: 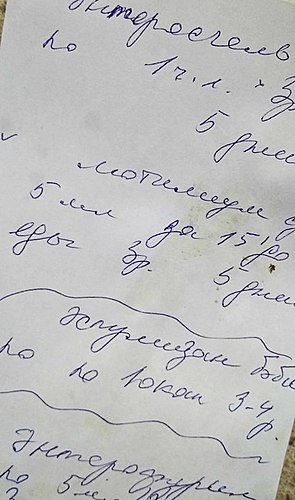 The pills are quite large. I crumbled into a measuring Cup. They can easily choke. Do not dissolve in water, as I thought, but form a suspension. If stir and quickly pour into the mouth, together with water easy to swallow. My son is easy to swallow pills, so I will not say that these are something special.

All the details can be read in the instructions below.

For larger picture click 2 times on the photo. It becomes quite clear and readable.

The disease has receded. The preliminary diagnosis was the flu. But since none of the tests we passed, there is no assurance that it was. In General, the antibiotic I am grateful. Even more grateful to the doctors who prescribed the correct treatment and helping nervous the mother to cope with the difficult situation. If not for this unpleasant side effect, something to find fault with the pills there would be no reason.

A review on removal of the adenoids the child in 4 years under General anesthesia.

100% coverage of the eyelashes – this brush will find even the ones you didn't know! Expressive, neat, curved - Urban Decay Perversion Mascara knows how to make them!4 monthsDecorative cosmetics

Versatile, warm, nadowa palette eyeshadow, thanks to which I now do every day a new day make able to hold out to the very make-up remover4 monthsDecorative cosmetics

Got what wanted! The effect is only mildly strange, on one eye...4 monthsCaring cosmetics

If it's a poison, that it is delightfully pleasant! My acquaintance with Girl Poison by Dior.4 monthsPerfume

This hair product or a new chemical weapon!? In my need to understand. Chasing the dream or to stay with your hair after this "miracle mask".4 monthsCaring cosmetics