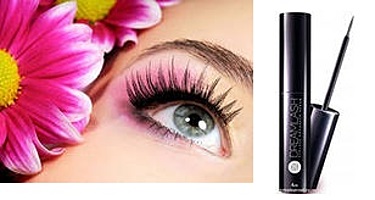 Got what wanted! The effect is only mildly strange, on one eye...

Who among us does not dream about gorgeous long eyelashes, like in the song: "Clap eyelashes and fly up!"

I'm sure that there are no such! Everyone wants to have long, thick, beautiful eyelashes, which gave the look a touch of tenderness. Doll lashes is every woman's dream.

Many resort to extension glue false eyelashes.. but I decided to try to put your natural! Well I don't want artificial, not real, funny and sometimes even scary eyelashes. Want, native))

Let us rather take a look at it.

The tool arrived Packed in a branded Kraft package with the company logo. 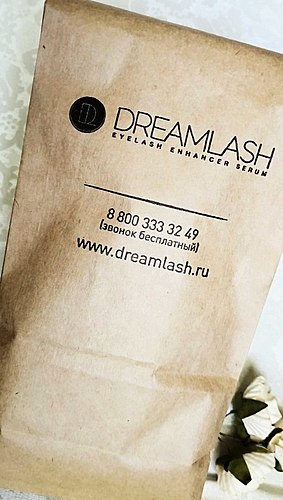 Here inside this box. 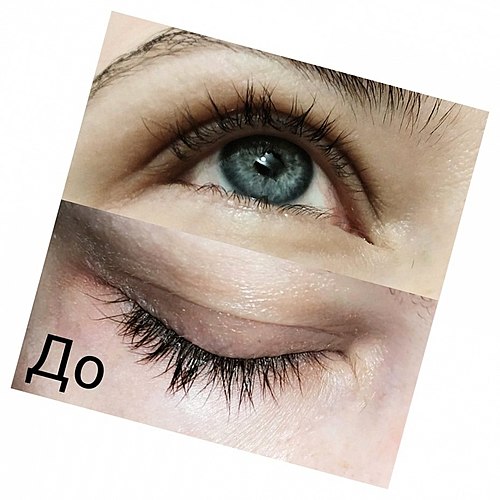 Black packaging, with the inscription on the front DREAMLASH. Stylish, beautiful, tasteful.

On the box there is information on the composition and shelf life. 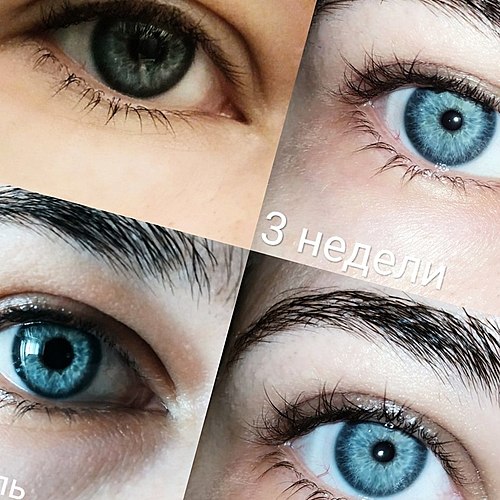 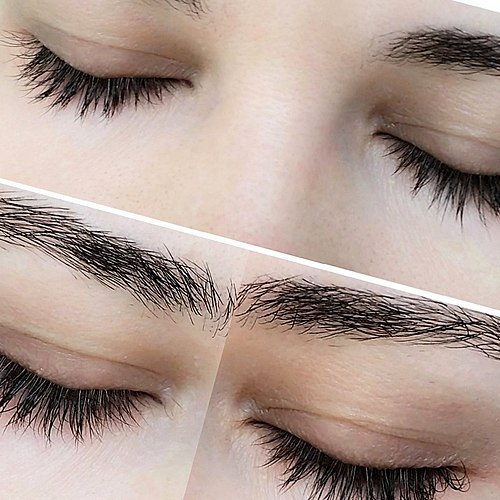 Inside the tube, similar to mascara. The same elongated and rounded. Inside the box is embedded with detailed usage instructions. 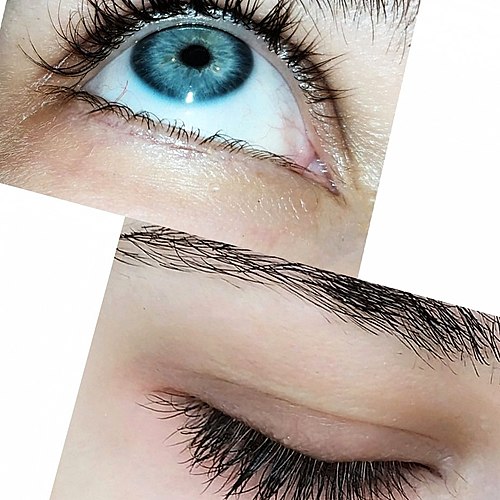 ▪ THIS GENERAL INFORMATION ▪THIS

Why: for eyelash growth

The neck of the bottle screw-on, like mascara, the brush I expected to see appropriate. Thought Unscrew, there is a brush with which the product is applied to all the lashes, but no.. it was not there. The brush that I saw surprised me a little and plunged in a stupor.. How to use it then? It turned out much easier, the tool is applied to the entire length of the lashes, but only on the roots.

This brush is thin and made of soft bristles. 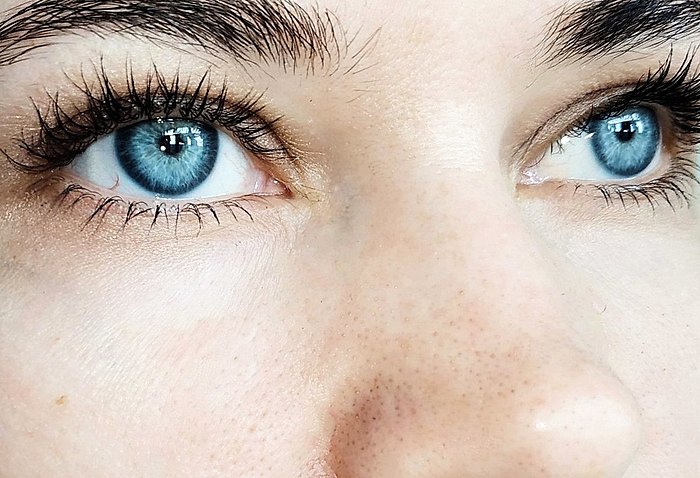 The neck has a restrictor, through which the brush removed the excess fluid and to us, it comes out slightly moist.

All this is very convenient because as I mentioned above, apply only need to the hairline. And for this we need thin and elongated, slightly moist tip.

If you shake the bottle, you can hear the characteristic for liquid splash. That is, the magic bullet was not enough.

🌸 The color of the liquid.

The consistency is watery.

Applied once daily, preferably in the evening before bedtime.

Get the brush and hold it over the lash line. 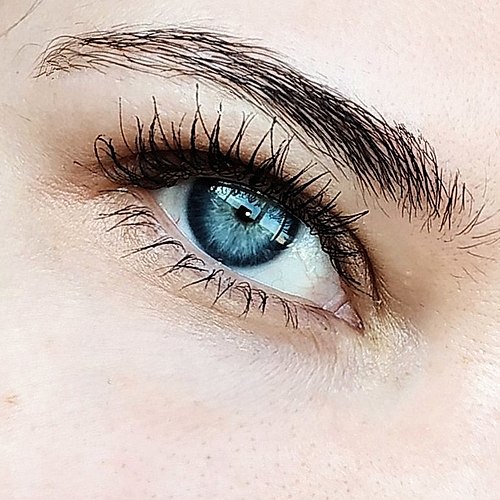 I prefer to apply naruzhnogo from the edges to the inside. In one application, moisten the brush a couple of times. The fluid it takes a lot, this is often to moisten is not necessary.

If you apply too much, it can get into your eyes, then there will be a slight tingling sensation. Not critical and is well tolerated, eye wash is not required. But, it is better not to try to flavor eyelashes as much as possible, the result will appear faster.

I will not say that the lashes, they require resuscitation procedures, emergency recovery, or they are sorely short ... no. They look decent enough but of course I wish they were lengthened and thicker. Here's a look at the cilia so-so.. 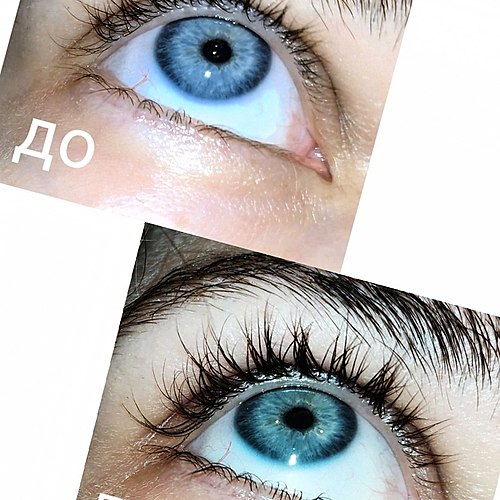 Even some baldness in the most responsible, at close examination.. 😲 Yeah, to be honest I didn't expect my lashes are "ragged", as it is not considered them from this angle..

Every night I put Grimes on my lashes, never missed a day. This process became mandatory nightly ritual.

If you want to achieve the effect of don't be lazy, just regular daily use will result. Drawing from case to case will not work here))

So here are my lashes in the dynamics, two months of use. 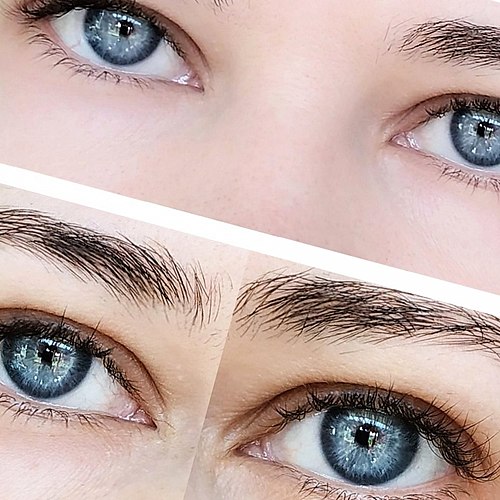 Eyelashes do grow, I began to notice after a couple weeks of use. I saw it in the process of dyeing eyelashes mascara. If before after coloring I have always used tongs for Curling, then two weeks later I ceased to use them. Lashes stayed curled and elongated.

Despite the fact that the result was fine with me then, and means in the bottle had a lot and I decided to spend it completely, as recommended by the manufacturer, and wanted to see what you are capable of my eyelashes))

A month later began to notice that on one eye the outer edge they curled stronger than in other places, and grow on this (left) eye they active. Here the cilia lengthened. 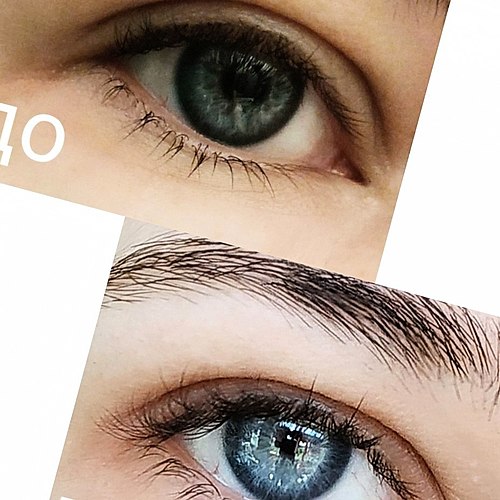 Please note, in the center of two very long lashes, and the edges much curled.

This fact is particularly noticeable on painted eyelashes. 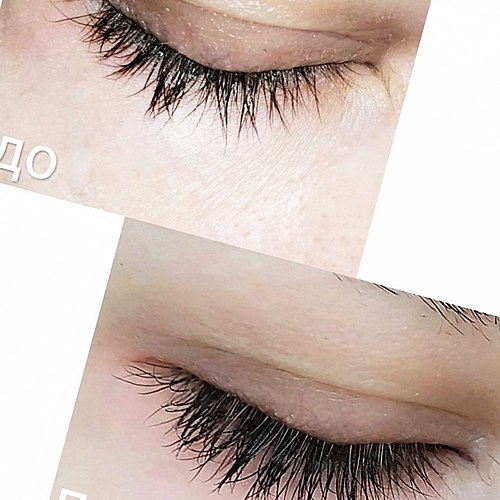 In the middle of a long, right up to the eyebrows, and skra curly 🤣 But it does not upset me, rather the contrary. Here's a feature I came up with. Actually, "curly eyelashes" in life are not as noticeable as in the photo. In reality, with the direct look curly almost not visible only at an angle.

Why is that my lashes do not grow evenly. On left eye dlinshe than on the right, but if it is itself to look closely. From the course is not noticeable. 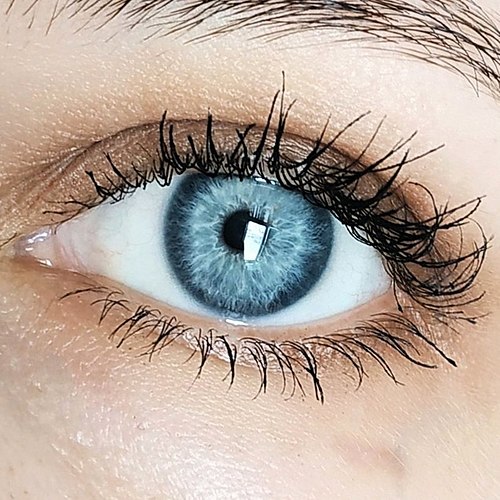 I used Grimes to the last drop, it took me 3 months of daily use.

Below the photo of the result. 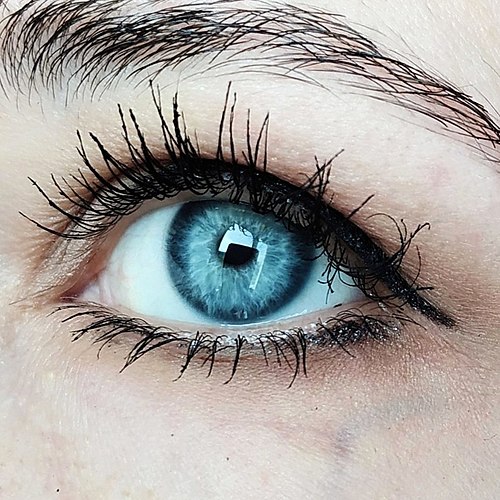 The photo can be clearly seen that the eyelashes are thicker and longer, right. No propleshin and the effect is just WOW!!! They are healthy and awesome! Eyelashes are not painted! 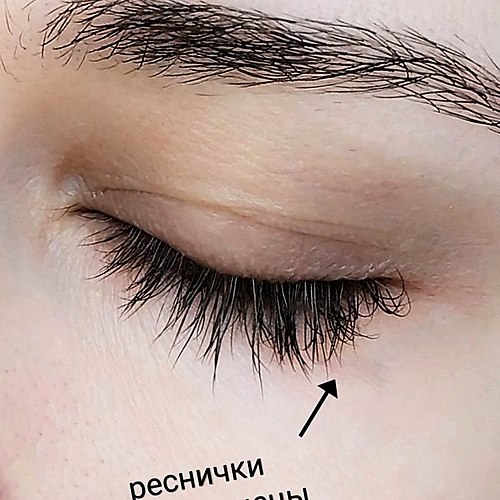 In direct view is not particularly noticeable length, but it is clear that they are tightened up. 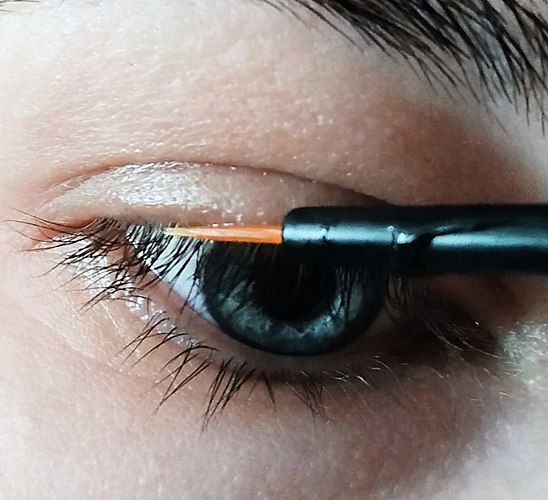 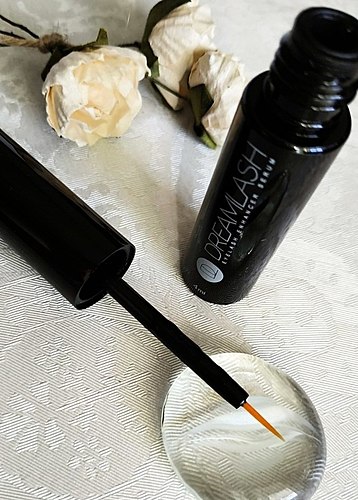 When this perspective is clearly seen that the cilia become lengthened and thicker, thicker and darker. 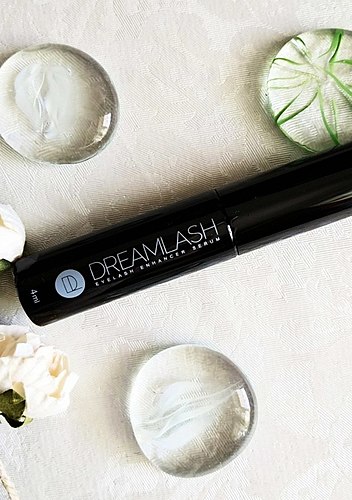 It was so bald I had eyelashes? Still can't believe it.. I write a review, make collages, and wondering why my lashes were so..

But the eyelashes painted mascara. 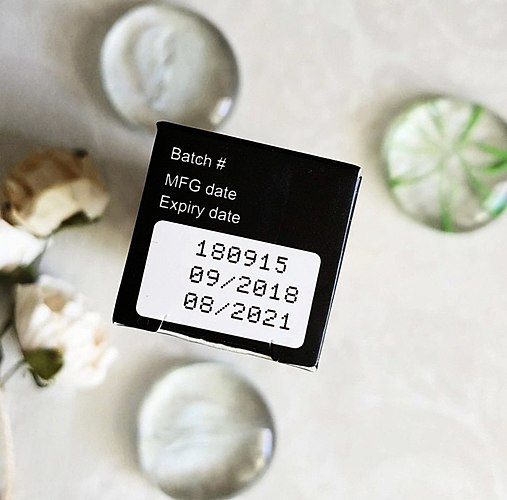 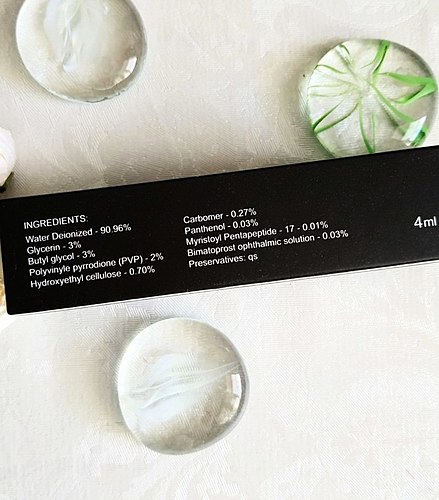 The effect is simply WOW! Lashes almost up to the eyebrows!

These luxurious lashes, I never had! They are elegant and natural, my family. No build-up, for curls and other procedures. I just paint the lashes mascara is a happy go all day)) spend the least time on makeup.

Grimes highly RECOMMEND anyone who dreams of natural, long, healthy lashes and against the development (like me). 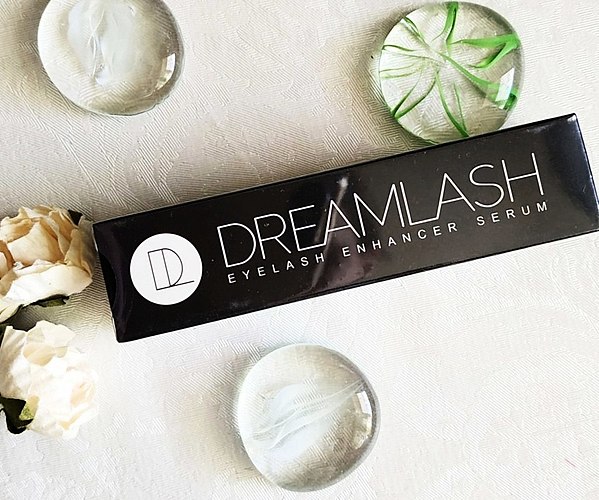 The strange case when the 201 for the summer! In combination with 208+how it will behave in the summer at the end of the day on oily skin4 monthsDecorative cosmetics

Б Do-it-yourself do-it-yourself ❧ Is it worth the time? My result after ➋ months of use, I share my impressions and a simple recipe for oily skin ✌29 daysBeauty, health different

The first meeting with Beldy. A unique tool, now has become my favorite.4 monthsCaring cosmetics

My favorite scent is always at hand! No, I don’t drag a bottle of perfume with me) Refresh the fragrance anywhere in the world and at any time a gorgeous beauty gadget helps me, my cute baby in eco-skin from Travalo is the Milano HD atomizer!29 daysCosmetic accessories